Interview with Statistics Professor Jeffrey Rosenthal: The key statistic that determines your chances of getting coronavirus

Due to myriad variables it’s not possible to predict your exact odds of contracting the novel coronavirus, but according to one renowned mathematician, there’s one statistic we should be closely tracking to gauge the probability of becoming infected.

It’s called the basic reproduction number (RO) and University of Toronto statistics professor, Jeff Rosenthal, says keeping that number low (below 1) is the key to eradicating the illness.

The World Health Organization estimates the RO for coronavirus to be between 1.4 – 2.5.

That means every person who contracts the virus could potentially spread it to up to 2.5 more people — making the prospect of containment highly unlikely.

Some studies put the number even higher.

“This reproduction number, if it’s more than 1, it keeps on getting bigger and bigger, but if it’s less than 1, it gets smaller and smaller and dies out, so that’s what the whole battle is about,” Rosenthal said from his U of T office on Monday.

“You get this kind of exponential growth where in new generations of the disease you are multiplying by some reproduction number, and that’s why diseases have the potential to spread really quickly.”

And while individuals may feel helpless in the face of an invisible virus that seems to be spreading across the world at an alarming rate, Rosenthal stressed that when it comes to lowering the reproduction number, a little goes a long way.

“Things as simple as if everybody washes their hands more, people don’t touch their faces, they seem like simple things but if they make it a little less likely that you’re going be infecting the next person, that could cut this reproduction number down that little bit, and every little bit could make a big difference in the long run for how the virus spreads.” 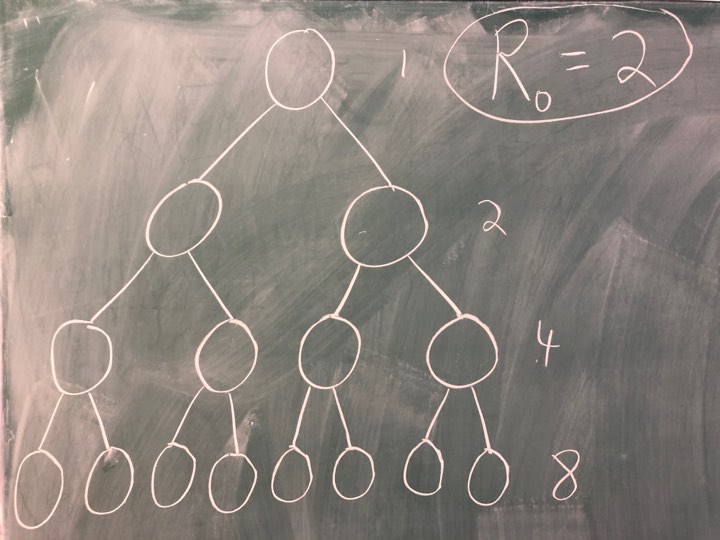 Due to the relatively low number of cases in Ontario (18 at publish time) Rosenthal says the odds of contracting the virus in the province remain quite low.

But that could change as more and more cases surface and attempts to track the virus begin to overwhelm health care workers.

“But as the numbers go up, as they are starting to, it gets less and less likely that you’ll be able to contain it and once there’s enough people that have it, you can’t track everybody and figure out who talked to who … and as long as that reproduction number stays high, it’s going to just spread and it’s really hard to control at that point.”

Rosenthal says the novel coronavirus has a significantly higher mortality rate than the flu, which kills thousands of Canadians a year.

“About 1 person in 50 who gets the novel coronavirus is actually going to die from it, which is quite high compared to say the common flu,” he said. “(The flu) is still only about 1 in 1,000 people who get the ordinary flu who are going to die from it.

“But if it’s about 1 in 50 for novel coronavirus — that’s a fairly high fraction so it’s going to cause a lot of destruction.”

Rosenthal has made a career out of studying probabilities, and while he believes there’s still a chance Canada can contain the spread of coronavirus, he still sees cause for concern.

“We are seeing in Canada — they are doing a pretty good job — but it’s starting to seep in.”

“I would say there’s still some chance in Canada that it will be contained … but it doesn’t seem that likely,” he added.

“It seems more likely at this point that it’s going to get out and spread and then a significant fraction of the population would probably get it.”

Click here to watch the full interview with CityNews.